LFJ Steering Committee have been preparing for the event while paying much attention to government announcements and the current social situation regarding COVID-19. However, we concluded it is already difficult enough to continue preparation and to sustain the project. Firstly, many of the participating artists will not be able to enter Japan due to the March 18 announcement to expand immigration restriction for visitors from overseas until end of April. Secondly, the outlook for domestic infections for May is still unpredictable.

It is indeed a heartbreaking decision to cancel this music festival, which has been supported by so many audiences, business partners and sponsors for 15 years since its foundation in 2005. We completely understand how extremely disappointing this is for those who have been looking forward to coming to LFJ. Ultimately, there is no higher priority for us than the health, safety and physical well-being of each of you, together with all stakeholders involved in the production of the event. We sincerely thank you all for your continued support, loyalty and patience during this difficult time.

LA FOLLE JOURNÉE TOKYO for 2021 and beyond is yet to be decided, but we look forward to your future visit and hope to see you again at the next production. 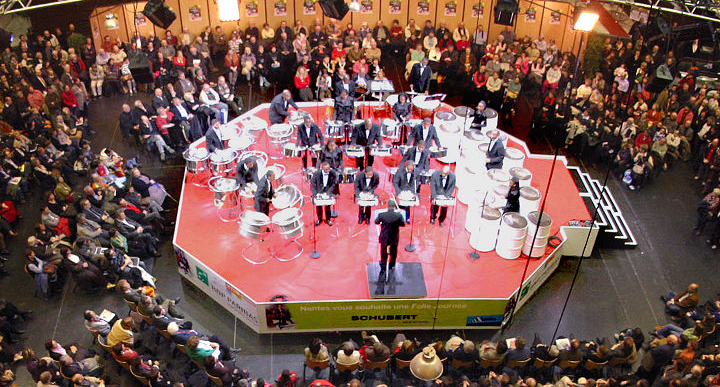 La Folle Journée is a classical music festival which was born in 1995 in the French western port town of Nantes. The name of the festival refers to the play by Pierre Beaumarchais, The Marriage of Figaro, whose alternative title is The Follies of a Day. As its name, it is one of the most exciting musical festivals in Europe and in the world. Each year a new theme is given by which composers and pieces are chosen. In the convention centre “Cité des congrès Nantes”, there are 9 halls, where multiple concerts of 45 minutes in length are held simultaneously from morning until night. Artists include young and upcoming, to world renown, 300 concerts in 5 days! You can choose concerts you like and spend the whole day immersed in music!
Tickets are at a surprisingly low price from 6 euros to 30 euros (about 700 to 3000 yen). The Artistic Director, René Martin’s wish was to attract a new audience that could be a part of supporting music while enjoying top quality concerts in this unique carefree setting. 60% of the visitors are first timers to classical concerts including many children.
The unique concept of La Folle Journée has expanded worldwide with festivals taking place in Lisbon, Portugal from 2000, Bilbao, Spain from 2002, and Tokyo, Japan from 2005. La Folle Journée was also held in Kanazawa, Japan and Rio de Janeiro, Brazil in 2008, Niigata and Lake Biwa, Japan, Warsaw, Poland in 2010, Tosu City Japan in 2011, and Ekaterinburg, Russia in 2015 which all brought sensational success in each city. 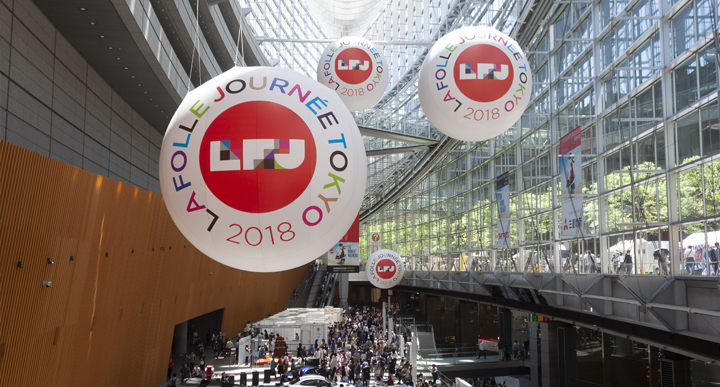 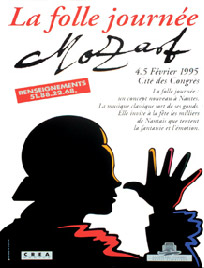 When René Martin planned the first festival in 1995, the theme was “Mozart.” The concept was to hold a two-day concert in multiple venues where music was played around the clock, a music festival that was truly festive. He got his inspiration for its name from Beaumarchais’ play La Folle Journée, or Le Mariage de Figaro (The Mad Day or The Marriage of Figaro). Mozart based his opera upon this play, which was published in 1784. It was a revolutionary work that overturned the values of its day and is even said to have lit the fuse for the French Revolution. Its title La Folle Journée was a perfect match for René Martin’s dream of sweeping away the various barriers that keep people away from classical music. The poster for the first La Folle Journée showed a silhouette of Mozart’s thumbing his nose humorously. It was an image of Mozart, the iconoclast who defied the conventions of his day.

1) An innovative theme is proposed every year
2) The length of each concert is only 45 minutes: audience can catch several concerts if they wish and experience a variety of concerts all day from morning to evening
3) Concerts by top international artists are offered at low prices
4) A variety of free events are proposed
5) From families with babies to ardent music lovers, listeners from all kinds of backgrounds can enjoy live performances in a relaxed setting
6) A great festivity that fills the city with music

Beethoven, one of the most exceptional geniuses in western history. His 250th birthday is celebrated all over the world in 2020. This year’s La Folle Journée (LFJ) features several famous works by Beethoven along with lesser-known “rare” pieces that are seldom performed at concerts, and arrangements written by Beethoven himself. Also highlighting the influences he had on musicians of his time and those who followed, the program includes arrangements of Beethoven’s compositions that were carefully selected for our audience.

Also well into the 20th century and continuing into contemporary times, many compositions dedicated to Beethoven have been created and therefore along with some of these works, LFJ will present various new original projects.

Beethoven’s music and various artists who were inspired by him come together at LFJ, and we hope this occasion is filled with several new discoveries for you.